We’re back looking at connection games again, and this time we’re going to cover a game invented in 2017 by Craig Duncan — Side Stitch.  Side Stitch is a game reminiscent of Star and *Star, where players must make connections between groups touching key cells along the edges of the board.  Where Side Stitch differs from its predecessors is that it incorporates a recursive group-scoring mechanism that ensures there are no draws, rather than using a scoring penalty to encourage the formation of larger connected groups as in Star and *Star.

How to play Side Stitch

Side Stitch is played most frequently on hexhex boards (hexagonal boards tesselated with hexagons — examples below), on which the edges have coloured borders (although other shapes are possible — see the game’s image gallery on BGG for examples).  The number of colour-sides does not necessarily match the number of sides of the board!

The rules are very simple:

Here are some sample boards I made in Adobe Illustrator based on Craig Duncan’s designs, available for download on BGG: 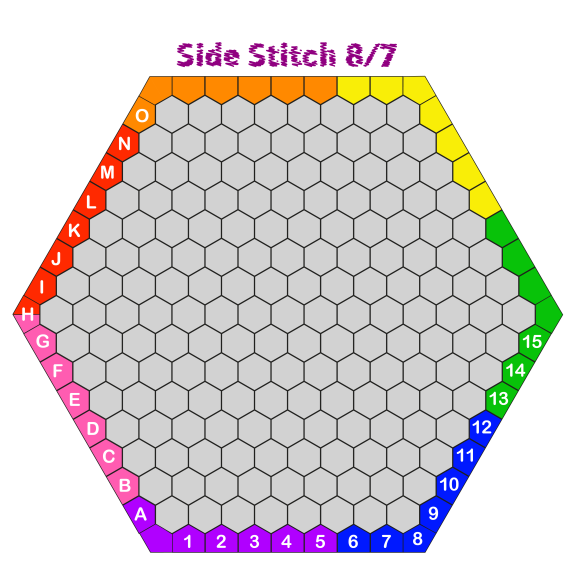 Side Stitch hexhex-8 board with 7 colour-sides.  This is Craig Duncan’s pick for the ‘standard’ Side Stitch board, as he feels the 169 hexes allow for a suitably complex game without it overstaying its welcome.

From these sample boards you can see that Side Stitch plays well on wide variety of board shapes and sizes, and with different numbers of colour-sides.  The colour-sides also give the boards a lively and appealing visual aspect.  Craig Duncan recommends the hexhex-8 board with 7 colours-sides as the ‘standard’ Side Stitch board; I tend to agree with him that this board allows for deep and challenging play without dragging on too long.  Having said that the hexhex-10/9-colour board allows for a bit more of strategic battle, and to me is equally as good as the standard board.

The recursive group-scoring mechanism — comparing highest-scoring groups first, then second-highest, and so on until any ties are broken — has appeared in a few recent connection games and related titles, most notably Nick Bentley’s highly successful Catchup (easily my favourite game of his at the moment).  This mechanism works particularly well in Side Stitch — draws are impossible and the winner is very easy to determine.  In combination with the board’s brightly-coloured sides, it makes a strategically and tactically complex game highly readable in play — following who’s ahead is very straightforward.  As a whole, Side Stitch is a fun, elegant and fundamentally flexible game that scales really well.

Side Stitch in play

Despite its simplicity, players discover very quickly that Side Stitch has enormous depth and variety.  As players attempt to stitch the colour-sides together to form the highest-scoring group, they’ll need to pay equal attention to interfering with their opponent’s plans as well.  The need to connect widely ensures that play spans the entire board surface, and strategic concerns remain paramount even on smaller boards.

Here’s a sample game, one of my early attempts against Ai Ai’s MCTS player on the hexhex-7/9-sided board: 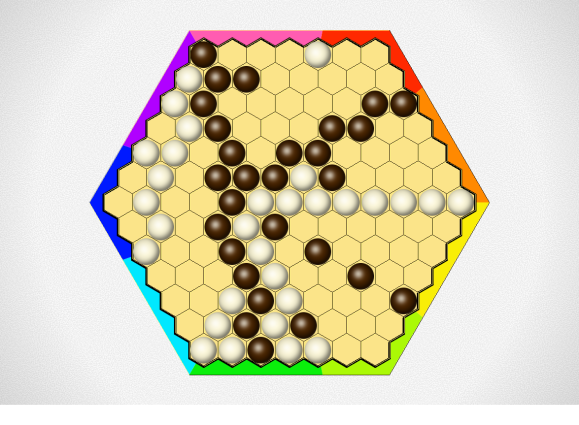 The AI is playing Black here, and won with a board-spanning group in the centre connected to five colour-sides.  As this was an early attempt at the game, I was too wrapped up in my own attempts to connect in the opening phase, and failed to counteract Black’s efforts to split my stones in two.  Here’s a GIF so you can see my shame step-by-step:

After several more losses, I took a game from the AI on the hexhex-8/7-sided board.  By this time I’d learned how to balance my attack and defence obligations more appropriately and to manoeuvre a bit more cleverly across the board.  The AI (Black) resigned in this position:

You can see that Black made a valiant, and ultimately successful, effort to block me from the left side of the board entirely.  However, I was able to extend all the way to the top-right corner, which together with the connections on the right and bottom netted me a group scoring 5 points — an insurmountable margin for Black.  Here’s a GIF of the full game:

Now this game is still young, and I’m by no means an expert myself, so it’s difficult to give detailed tactical and strategic advice.  But hopefully these sample games can give you some idea of how Side Stitch feels in actual play.  For me it’s a standout amongst the many recent connection games — it’s easy to understand but affords some very intricate play.  The colourful boards are really appealing, too, and so far the game retains its character and excitement on all the boards I’ve tried.

At a tactical level, connection game basics from Hex et al. will serve you well here; for strategic considerations, you can take some inspiration from games like Star and Starweb.  What’s key in Side Stitch, as in other connect-key-cells games, is to impede your opponent’s progress as well as furthering your own connections.  You also have to keep in mind the recursive scoring mechanism — if you and your opponent are fighting a close battle, then your second- or third-best group may well decide the game!  So don’t forget to develop additional scoring groups, in case the board situation may require a tie-break with your lesser groups.

In response to thread on BGG, Side Stitch designer Craig Duncan designed a way to play Side Stitch using the six sides of the hexhex board, rather than having a different number of colour-sides.  In order to keep the play the same and avoid draws the board ends up being a bit different: 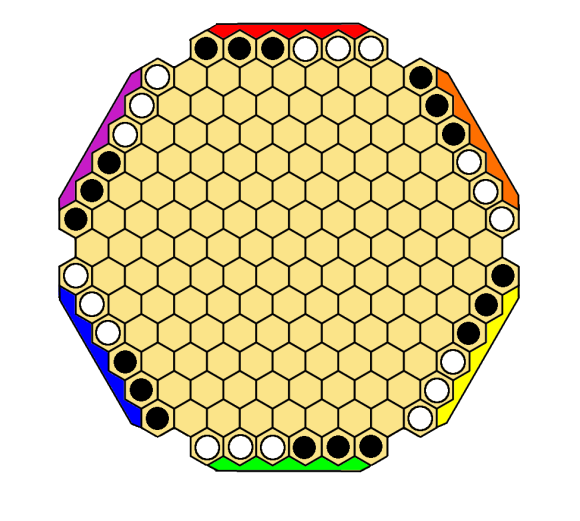 The rules of Side Stitch 6 are the same as in normal Side Stitch, except that the missing corner cells obviously aren’t playable, and each player starts with stones already in contact with each of the six colours.

Personally I’d rather just play regular Side Stitch and try lots of interesting colour combos, but it’s nice that the game still holds together with six sides or other even numbers of sides, with some small adjustments.

IMPORTANT UPDATE: Side Stitch is now playable at the Gorrion Server!  Here’s how the game looks over there — note that scoring is not yet implemented so players have to do that on their own.  So far we have the hexhex-8 board with 7 colour-sides available (Craig’s standard board). 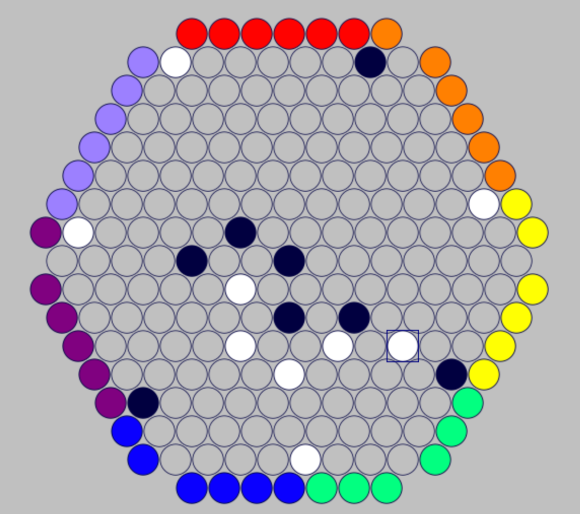 The discussion on Side Stitch 6 eventually lead to the development of a sister game, Exo-Hex.  Exo-Hex takes the next logical step from Side Stitch 6 and eliminates the colour-sides entirely.  Instead, black and white stones are placed outside the boundary of the board — these are called ‘exo-stones’ — and players compete to build groups connected to the largest number of exo-stones.  The win condition and scoring mechanism are the same as in Side Stitch.  The result looks like this:

Speaking personally, I’d still rather play Side Stitch — it has a level of personality and flexibility/extensibility that Exo-Hex doesn’t.  But as a consequence of this more focussed design, Exo-Hex is easily playable with any standard hexhex board and two colours of stones, and it’s elegantly simple.

Our last game of today is Iris, another 2019 invention from Craig Duncan with links to elements of Side Stitch.  Iris also has a colourful visual presentation and uses recursive group scoring, but uses a different movement protocol.

I haven’t yet had the pleasure of playing Iris, but the prospect of a connect-the-key-cells game with two moves per turn (this is known as the 122* move protocol) is quite appealing.  The additional move would allow for some complex threats to be made and answered during play, and might further encourage the players to attempt adventurous cross-board connections.  A nice side-effect of the 122* protocol is that the pie rule isn’t necessary; the first player’s single placement at the start balances out the first-move advantage.

Side Stitch and its kin here show us that the design space surrounding the Star/Starweb connect-the-key-cells concept is rich with possibilities.  Side Stitch’s adoption of the colour-sides and recursive group scoring gives it a distinct character from its ancestors, and in play it shines as one of the better connection games I’ve played in recent years.  Exo-Hex and Iris are a bit more focussed in design, which has pluses and minuses — of the two, Iris stands out as having some interesting potential.  The 122* move protocol with placement restrictions adds an interesting wrinkle to this sub-genre of games.

All told, Craig Duncan’s had a productive couple of years!  Out of the three Side Stitch is clearly my favourite design, but if the others become playable via Ai Ai or other venues then that may change.  For now I think Side Stitch offers personality, playability and flexibility, and it’s certainly made it to the ranks of games for which I plan to print a mat and encourage others to play.

Next time, we’re going down a somewhat different route.  I’ll be covering a single game, the classic Twixt, in significantly more detail than the other games I’ve presented here.  This will be possible thanks to David Bush, three-time Mind Sports Olympiad Champion in Twixt, who has not only sent me fantastic content for that post but has given me a Twixt trail-by-fire in some very challenging games.  So do look forward to that post — hopefully you’ll come to the end of it packed with Twixt knowledge and ready for the tactical challenges the game has to offer.

This site uses Akismet to reduce spam. Learn how your comment data is processed.

As is often the case in academia, I am under pressure to publish scientific papers in for-profit journals, many of whom make immense profits on the back of our academic labour. This seems rather cheeky to me, given that we provide all the content, do all the peer review, and do all the editing and revision ourselves.

Unfortunately, due to the mess academic publishing finds itself in, I may not always be able to post all my papers here (though I shall do my best). However, should you find any copyrighted material of mine on the Web somewhere, please feel free to distribute it far and wide. Copyright law is a relic of a bygone era, and should be treated as such.

As for the contents of this blog, please feel free to share, modify, or redistribute any of its contents in any way you see fit, so long as you preserve this notice along with it, as per the Creative Commons Attribution Share-Alike license.